This post is part of the official cover reveal for Dawn Metcalf’s Invisible. The joke cover reveal was on April 1st 😉 Information on her other books are also included. Unrelated, but still awesome: Dawn is a second-degree black belt in Shaolin Kempo Karate. 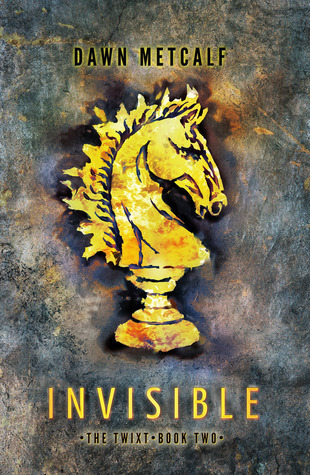 Dawn Metcalf
Invisible (The Twixt, Book 2)
Harlequin Teen (US: 30th September 2014)
Buy (US) Buy (UK) Buy (CA) Buy (Worldwide)
Some things lie beneath the surface. Invisible. With the power to change everything. Joy Malone wants it all – power, freedom and the boyfriend who loves her. Yet when an unstoppable assassin is hired to kill her, Joy learns that being the girl with the Sight comes with a price that might be too high to pay. Love will be tested, lives will be threatened, and everyone Joy knows and cares about will be affected by her decision to stand by Ink or to leave the Twixt forever. Her choice is balanced on a scalpel’s edge and the consequences will be more life-altering than anyone can guess.

Dawn Metcalf
Indelible (The Twixt, Book 1)
Harlequin Teen (US: 30th July 2013; UK: August 2013; AU: 1st August 2013)
Buy (US Kindle Edition) Buy (US Paperback) Buy (UK) Buy (CA) Buy (Worldwide)
Some things are permanent. Indelible. And they cannot be changed back. Joy Malone learns this the night she sees a stranger with all-black eyes across a crowded room – right before the mystery boy tries to cut out her eye. Instead, the wound accidentally marks her as property of Indelible Ink, and this dangerous mistake thrusts Joy into an incomprehensible world – a world of monsters at the window, glowing girls on the doorstep and a life that will never be the same. Now, Joy must pretend to be Ink’s chosen one – his helper, his love, his something for the foreseeable future…and failure to be convincing means a painful death for them both. Swept into a world of monsters, illusion, immortal honour and revenge, Joy discovers that sometimes, there are no mistakes.

Dawn Metcalf
Luminous
Penguin Dutton (US: 30th June 2011)
Buy (US) Buy (UK) Buy (CA) Buy (Worldwide)
As reality slips and time stands still, Consuela finds herself thrust into the world of the Flow. Removed from all she loves into this shifting world overlapping our own, Consuela quickly discovers she has the power to step out of her earthly skin and cloak herself in new ones – skins made from the world around her, crafted from water, fire, air. She is joined by other teens with extraordinary abilities, bound together to safeguard a world they can affect, but where they no longer belong. When murder threatens to undo the Flow, the Watcher charges Consuela and elusive, attractive V to stop the killer. But the psychopath who threatens her new world may also hold the only key to Consuela’s way home.