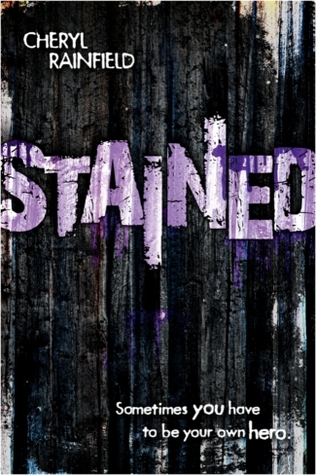 There seems to be an unspoken rule that if something has a positive message, you can’t disagree with how it’s presented. Actually, that rule is spoken after someone dares to criticise the message’s vehicle.

There’s a lot of messages I like, but dislike how they’re presented. Lady Gaga’s “Born This Way” song may be upbeat and positive, but Madonna’s “Express Yourself” is way better. (They’re two different songs, Tezzy; you can’t compare them! Listen to the music, and tell me they don’t sound similar. Don’t lie.) It’s not even the best song on the Born This Way album. (“Government Hooker” is, followed by “Scheiße”.)

And if you dare say you don’t like the TV show Glee, people call you anti-gay, anti-arts, and a hater. I stopped watching after the first season when it stopped pretending to have a plot (teen pregnancy). It instead became just karaoke, with storylines written around the songs, instead of writing the stories first and then finding appropriate music.

And now there’s Stained. Sarah Meadows judges people as much as they judge her, but the difference is she doesn’t vocalise her opinions. She thinks of her best friend as “plump”, and doesn’t want to hook up with Nick because she doesn’t deem him good-looking enough. And if she thinks of her friends like this, she does worse of others.

“You know you can trust me.” As soon as someone says that, you know they can’t be trusted. We can tell from the book’s message that Sarah will survive, and we know who does it from the quote, so there’s no mystery or suspense. Thus the interest factor goes down.

Nick is so freaking rude towards the police, keeps accusing them of not doing their jobs, and not trying hard enough to find Sarah… UP YOURS, NICK! You have no idea what police go through, how many different cases they have, and how they are all top-priority cases. NOT EVERYTHING IS ABOUT YOU! Have some respect.

“Doesn’t seem right, bad things happening to good people, does it? If it had to happen to anyone, it shoulda been one of those mean bitches, like Madison.” What the hell does that mean? Do some people, more than others, deserve to be abducted, raped, and maybe murdered? I’ve heard victims of crime say they wouldn’t wish what happened to them upon their worst enemy. But this book totally does!

I AM NOT AMUSED.

I’m so offended I can’t even respond to that.

So yes, a supposedly positive message with a poor delivery. Subtlety is a writer’s best tool: Allow readers to come to their own conclusion rather than shoving it down their throats. They’ll appreciate it more, and it won’t leave such a bad taste.

This is such a disappointment in comparison to the author’s other work. Cheryl Rainfield’s début, Scars, is brilliant, and I highly recommend it. It’s not just “an issues novel” – it’s also a mystery, and that “whodunnit” aspect makes Scars a prime choice for binge-reading.

But Stained… I agree with your message, but I disagree with how you present it. Morals are supposed to be something that the lead character, and readers, learn at the very end of the novel. NOT hammered at them all the way through it. Even if I like what you have to say (and I do), I DON’T LIKE WHEN PEOPLE PREACH AT ME. Themes are supposed to be subtle, a discussion starter so readers can decide for ourselves what we think a book means.

What a let-down, for such a fabulous premise. This should’ve been a tense psychological thriller. But it isn’t.

P.S. I know the author didn’t intend to offend. And if the novel was more subtle, I wouldn’t have even thought about hidden meanings. But writing and story-crafting are very difficult to master.

This entry was posted in Book Reviews, Cheryl Rainfield and tagged Stained. Bookmark the permalink.