Suzanne Collins
Catching Fire (Hunger Games, Book 2)
Scholastic (AU: 8th October 2013)
Buy (US) Buy (UK) Buy (CA) Buy (Worldwide)
Against all odds, Katniss Everdeen has won the annual Hunger Games with fellow district tribute Peeta Mellark. But it was a victory won by defiance of the Capitol and their harsh rules. Katniss and Peeta should be happy. After all, they have just won for themselves and their families a life of safety and plenty. But there are rumours of rebellion among the subjects, and Katniss and Peeta, to their horror, are the faces of that rebellion. The Capitol is angry. The Capitol wants revenge.

Sarah Crossan
Resist (Breathe, Book 2)
HarperCollins Greenwillow (US & CA: 8th October 2013)
Buy (US) Buy (UK) Buy (CA) Buy (Worldwide)
Resistance to the Pod Leadership has come apart. The Grove has been destroyed but so has the Pod Minister. Quinn, Bea and Alina separately must embark on a perilous journey across the planet’s dead landscape in search of the rumoured resistance base Sequoia. The welcome they receive at Sequoia is not what they expect, and soon they are facing a situation that seems as threatening as that of the Pod inhabitants. Meanwhile the former Pod Minister’s son, Ronan, is beginning to have his doubts about the regime but as a member of an elite force he is sent out of the pod to hunt down the Grove’s survivors. In a world in which the human race is adapting to survive with little air, the stakes are high.

Colleen Hoover
Losing Hope (Hopeless, Book 2)
Simon & Schuster Atria (US, UK & CA: 8th October 2013)
Buy (US) Buy (UK) Buy (CA) Buy (Worldwide)
Haunted by the little girl he couldn’t save from imminent danger, Holder’s life has been overshadowed by feelings of guilt and remorse. He has never stopped searching for her, believing that finding her would bring him the peace he needs to move on. However, Holder could not have anticipated that he would be faced with even greater pain the moment they reconnected.

Darynda Jones
Death and the Girl He Loves (Darklight, Book 3)
Macmillan St. Martin’s Griffin (US: 8th October 2013)
Buy (US) Buy (UK) Buy (CA) Buy (Worldwide)
The fate of the world is not something a girl wants on her shoulders, and that is especially true for Lorelei McAlister. Unfortunately for her, that is exactly where the world’s fate has decided to take up residence. Lorelei has seen firsthand the horrors that lie beneath our everyday world. And those horrors are getting her friends killed. Because of this, she agrees to leave the sanctity of her hometown and is sent to a different world entirely. A boarding school. But even here she is being watched. Someone knows what she is. What she carries inside her soul. And on top of that she’s seeing visions. This is nothing new for Lorelei. But these visions are something more: death, destruction, and the end of the world. Lorelei must face the fact that there are people who want her dead, and no matter where she goes, no matter how far she runs, the lives of her friends and family are in mortal peril. Lucky for her, her friends and family include the handsome Angel of Death, a fiercely protective half-angel, and a ragtag group of loyal supporters who aren’t afraid to get a little dirty in the name of fighting pure evil.

Amelia Kahaney
The Brokenhearted
HarperCollins Teen (US & CA: 8th October 2013)
Buy (US) Buy (UK) Buy (CA) Buy (Worldwide)
High in her tower above Bedlam City, prima ballerina Anthem Fleet has lived her whole life by her parents’ strict rules, never leaving the sparkling, pristine North Side. Until she meets Gavin. An artist from the dangerous South Side of town, Gavin is like no one Anthem has ever met – and she falls for him suddenly and completely. But Gavin’s world is as dangerous as it is intoxicating, and their romance crashes down around them one terrible night when they are attacked on the South Side and Gavin is kidnapped. When she wakes in a dark, blood-soaked lab, Anthem has a jagged scar down her chest…and an experimental bionic heart ticking inside her. As Anthem will soon realise, her new mechanical heart didn’t just save her life – it left her with a strange and terrifying new strength. A strength that she’s going to need if she has any chance of rescuing Gavin and mending the scattered pieces of her broken heart. 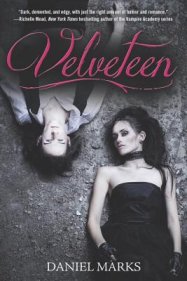 Daniel Marks
Velveteen
Random House Ember (US & CA: 8th October 2013)
Buy (US) Buy (UK) Buy (CA) Buy (Worldwide)
At sixteen, Velveteen Monroe was kidnapped and murdered by a madman named Bonesaw. But that’s not the problem. The problem is she landed in the City of the Dead. And while it’s not a fiery inferno, it’s certainly no heaven either. Grey, ashen and crumbling more and more by the day, and everyone has a job to do there. Which doesn’t leave Velveteen much time to do anything about what’s really on her mind. Bonesaw. Velveteen aches to deliver the bloody punishment he deserves. And she’s figured out just how to do it. She’ll haunt him for the rest of his days. It’ll be brutal…and awesome. But crossing the divide between the living and the dead has devastating consequences. Velveteen’s obsessive haunting could actually crack the foundation of her new world, not to mention jeopardise her very soul. A risk she’s willing to take – except fate has just given her reason to stick around: an unreasonably hot and completely off-limits co-worker. Velveteen can’t help herself when it comes to breaking rules…or getting revenge. And she just might be angry enough to take everyone down with her.

J. A. Souders
Renegade (Elysium Chronicles, Book 1)
Macmillan Tor Teen (US: 8th October 2013)
Buy (US) Buy (UK) Buy (CA) Buy (Worldwide)
Since the age of three, sixteen-year-old Evelyn Winters has trained to be Daughter of the People in the underwater utopia known as Elysium. Selected from hundreds of children for her ideal genes, all her life she’s believed that everything is perfect. Her world. Her people. The Law. But when Gavin Hunter, a Surface Dweller, accidentally stumbles into Elysium’s secluded little world, Evelyn comes to a startling realisation: Everything she knows is a lie. Her memories have been altered. Her mind and body aren’t under her own control. And the person she knows as Mother is a monster. Together with Gavin she plans her escape, only to learn that her own mind is a ticking time bomb…and Mother has one last secret that will destroy them all.

Scott Tracey
Phantom Eyes (Witch Eyes, Book 3)
Llewellyn Flux (US: 8th October 2013)
Buy (US) Buy (UK) Buy (CA) Buy (Worldwide)
After Grace Lansing ripped out the power of his witch eyes, Braden is left broken. His beloved Uncle John is dead, his body is being hijacked like a puppet, and everyone – from ghosts to demons to warlocks – seems to have Braden’s death on their to-do lists. Torn between fleeing to safety and making a stand to regain his power, Braden searches for answers about the witch feud’s origins. But when Grace sets her ancient plan in motion, Braden is determined to reclaim his birthright. As key players converge on the deep wellsprings of magical energy hidden in town, one thing becomes clear: whoever controls the magic will control Belle Dam. Braden’s only hope is to become the weapon he never wanted to be, but could unleash the monster that lurks inside him.