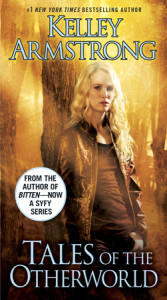 Like Men of the Otherworld, Tales of the Otherworld is also an anthology of Kelley Armstrong’s Otherworld-based short stories and novellas, which were previously free digitally on the author’s website, but are now available from her regular publishers, with proceeds donated to World Literacy Canada. Since I’d read all but one of the stories before, they weren’t fresh, and thus my enthusiasm for this tome is lower than perhaps it otherwise may have been.

Rebirth is a great look at how Cassandra DuCharme and Aaron Darnell met. Bewitched is an appealing romance between Eve Levine and Kristof Nast. Birthright still leaves a lot of questions about Logan Jonsen’s paternal family. Expectations sees Lucas Cortez and Eve have a run-in. And Ghosts is more of a Jeremy Danvers vignette than a short story.

But Beginnings is disturbing. Actually, more to the point, Clayton Danvers is disturbing: he treats Elena Michaels like a dog, he stalks her, and he turns her into a werewolf without her permission. As far as romances go, this is pretty effed-up. I’m not a big fan of romance fiction, because generally the characters don’t work for me – as a couple, or individually. I really like Elena, but I’ve never liked Clay, so I don’t respect Elena for hooking up with him. And staying together. And marrying, and having puppies human children. But perhaps the worst thing of all is that Elena knows this relationship isn’t right. She’s not stupid enough not to realise it, but she is stupid enough to continue the relationship.

First, Clay was possessive…Such behaviour was one of the four danger signs of an unhealthy relationship…Another sign was not wanting you to spend time with your friends…Or maybe I was rationalising away something I didn’t want to see. Equally troubling was that Clay kept our relationship a secret from his family and friends…my gut was twisting, my brain feeding me all those little warnings I tried so hard not to hear, telling me something was wrong, wrong with us and wrong with him, and why the hell wasn’t I taking the hint?

How many times had I seen women in destructive relationships?…I’d seen women battered by abuse – physical, sexual, and psychological – and when asked why they stayed, so often their only defence was “I know he loves me.” Until now, I’d never understood how you could cling to those words, that belief, and use it to wash away every misgiving. I had other talismans, too…He’s never hit me. Never threatened to…except for last weekend, when he’d turned on me, hand raised, eyes blind with rage, knuckles brushing my cheek. But that had been a mistake. A mistake…So many excuses.

Really, Elena should’ve hooked up with Logan or Nick.

As for The Case of El Chupacabra…Lucas could really do with a sense of humour. I just don’t like him. I like Sean Nast, and Cassandra, and I do like Savannah Levine in this story, but I suspect I may not like her point of view when she narrates the next two full-length Otherworld novels.

Wait for the paperback of this collection.

This entry was posted in Book Reviews, Kelley Armstrong and tagged Tales of the Otherworld. Bookmark the permalink.