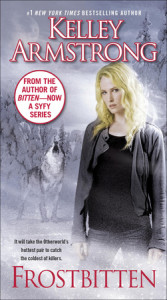 Elena Michaels and the American Pack know that recent emigrant Reese Williams is being framed by his allies. Running from Elena makes it hard to tell him, so she follows the Antipodean to Alaska, a state no stranger to wolves…and perhaps not to werewolves and other beasties, either. Soon Elena discovers traces of new scents – other breeds of animal. But tracking down who’s responsible for the missing girls, the dead Pack member, and who knows what else requires more than one wolfy investigator. It’s time to call in the Pack.

Elena and Clay Danvers are on this mission without their three-year-old twins, who are with their grandfather and his lady friend. And these are no ordinary kids – they jump out of a second-storey window and escape with nary a scratch. This examplifies why I generally don’t connect with mothers as lead characters – because the kids are always precocious. No child is average; they’re super-smart and physically gifted, too. Is there wish fulfillment going on? Of course no parent wants to admit that their kid is kind of stupid, but in fiction stupid children don’t exist…well, they don’t if their parents are the protags.

Also, no one in this series really seems to have a full-time paying career. Elena sometimes writes for Canadian Press. Clay sometimes gives anthropology lectures. Jeremy sometimes does art. Jaime sometimes tours. Really, Hope Adams seems to be the only person with an everyday job that she actually does. How the others can afford to keep a roof over their heads, bills paid and food on the table is beyond my tiny comprehension. Supernaturals are loaded? Well, bugger me.

Danya Podrova is minor, but his surname confuses me. If the Ukrainian naming system is anything like its Russian counterpart, his surname should be Podrov – without the A. If he had a sister, she’d be Podrova, but not a man. I may be wrong, but if I’m right, this mistake has passed over quite a few heads on the way to publication. Who’s the right person to contact to see about getting this changed in a future edition?

Frostbitten is definitely the best of the latter Otherworld novels released. The witches/sorcerors/demons books have never really grabbed me the way the werewolf ones have. And considering that the last Otherworld book I read was the disappointing Men of the Otherworld anthology, Frostbitten is the perfect book to re-engage readers who may have fallen off the wagon. Not only that, but the new species of animal featured here are bloody fascinating, and there are some fantastic new characters, too. Reese is Australian, and is keeping his past a secret. He’s a buff, blond, twenty-year-old who looks like a surfie and has a name to match. (Generally, his name should be spelled Rhys, the Welsh way, but you know what surfers and bogans and whatnot are like with their spelling…) And we meet another Canadian – Morgan Walsh is a Newfie. Also cool is news of a Russian Pack, and expect to see Noah Albright return.

And protag Elena is awesome. Okay, so I question her taste in men, because Clay’s always pissed me off, but other than that, she’s pretty darn cool. She’s Canadian, and so provides a refreshing viewpoint, though she spends most of her time in the US. However, sometimes it seems as if Canadians are looked down upon by their more popular neighbours: One advantage to being a Canadian journalist is that Americans don’t expect you to know the rules. Nah, I think journalism’s pretty the same internationally, except in some censored countries. Also, you know this is the US when Elena purchases a weapon, and… the leftist humanitarian in me was appalled, while the warrior in me, heading into battle, was happy that she didn’t need to fill out paperwork and wait six weeks for a license. Turns out she didn’t need the weapon after all, but like that’s ever stopped anybody purchasing one…

This entry was posted in Book Reviews, Kelley Armstrong and tagged Frostbitten. Bookmark the permalink.